‘I wasn’t expecting it’: Allred’s family leave bill gets shout-out in Trump’s State of the Union address

February 6, 2020 Dallas News Comments Off on ‘I wasn’t expecting it’: Allred’s family leave bill gets shout-out in Trump’s State of the Union address 114 Views

Boy fatally struck by vehicle on I-820 in West Fort Worth, closing interstate, authorities say

Gas leak in downtown Fort Worth shuts down several city blocks, forces building to be evacuated

WASHINGTON – A little over halfway through President Donald Trump’s State of the Union address on Tuesday – an event that will be remembered most for partisan rancor – Dallas Rep. Colin Allred received a bit of a surprise.

There was the president, a Republican, giving a shout-out to a family leave bill that Allred, a freshman Democrat, had authored.

“I call on the Congress to pass the bipartisan Advancing Support for Working Families Act, extending family leave to mothers and fathers all across our nation,” Trump said, without mentioning Allred by name.

Allred said on Wednesday that he “wasn’t expecting it.”

“I was very happy to hear him talk about it,” he said, before giving an expanded pitch for his legislation to give new parents more flexibility in using a recently expanded child tax credit. “This is something we can actually get done for folks.”

Trump’s State of the Union, on eve of impeachment vote, is spectacle of rancor and enthusiasm

The Democrat’s bill wasn’t the only legislation by a Texan to earn Trump’s praise during the address. The president also urged Congress to pass school-choice legislation by Texas Sen. Ted Cruz, a Republican and vocal Trump ally, to use federal tax credits to encourage businesses or individuals to donate to scholarship funds for private schools or home schooling.

“Pass the Education Freedom Scholarships and Opportunities Act — because no parent should be forced to send their child to a failing government school,” Trump said, also without mentioning the Texas senator’s authorship.

Cruz, in a news release, praised Trump’s mention of the legislation, saying that it would help “ensure parents in all states have the same choice for their children.”

But the president’s embrace of the Allred bill stands out, in no small part because Republicans have circled the freshman’s Dallas-based seat as one of their top 2020 targets after he helped flip control of the House by unseating longtime Republican incumbent Pete Sessions in the last election.

Also, Allred’s legislation — which is sponsored in the Senate by Sen. Bill Cassidy, R-La. — might have an easier time reaching Trump’s desk. While Cruz’s proposal faces long odds in the Democrat-run House, Allred’s measure carries perhaps a fighting chance in both his chamber and the GOP-run Senate because of the key co-sponsors he’s secured on both sides of the aisle. 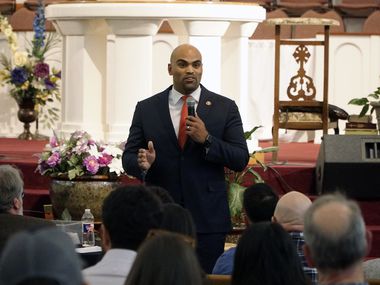 The family leave proposal would give parents the option of advancing up to $5,000 of the child tax credit in the first year after a child is born or adopted. That flexibility could help parents pay upfront for leave or other costs associated with child care, proponents have said.

Allred — a first-time dad whose son, Jordan, will soon turn a year old — participated last month in a White House roundtable to make his case for the legislation.

He said Wednesday that “there’s going to be things that I disagree with” the president on — including several components of Trump’s State of the Union address — and “certainly that this president plays up some of the divisions in our country.”

“But I look for things that we can work on,” he said.

‘I wasn’t expecting it’: Allred’s family leave bill gets shout-out in Trump’s State of the Union address 2020-02-06
Asif Khanzada
Share

Tags ‘I wasn’t expecting it’: Allred’s family leave bill gets shout-out in Trump’s State of the Union address

About a month into the start of the school year in Lancaster ISD, Leslie Beal’s …