HARRIS COUNTY, Texas (KTRK) — Hanan Ali was hunched over as he sat on a chair in front of a cash register at Pasadena’s Kool Korner convenience store.

Business had died down for the night and the store clerk was looking down at his phone when, within seconds of entering the store, a man wearing a black shirt and pants jumped onto the counter, pointed a gun at Ali and said, “Give me the phone right now. I will shoot you. I will shoot you.”

At first, Ali thought it was a couple of customers he didn’t recognize playing a prank. But the armed man wasn’t laughing. Ali put his hands up and followed orders.

“He got very serious and I told him (the money’s) in the register,” Ali recalled during an interview with 13 Investigates. “He wanted me to open the first register. I did that – it was empty. When I opened the second register, he put the gun towards me even more and it made me fall back.”

As the suspect grabbed handfuls of cash, a second suspect forced another employee into the restroom.

Ali said he couldn’t sleep for days after being robbed around 10 p.m. Aug. 6, 2018. The suspects were still on the loose.

Ten days later, police received a tip. John Segura, 27, was one of two men charged with aggravated robbery with a deadly weapon – a felony.

Court records show Segura, a repeat violent offender, was out of jail on bond just days after he was arrested in that case. A judge ordered Segura to wear a GPS ankle monitor that would track his whereabouts 24 hours a day, seven days a week.

But, the court didn’t issue Segura the monitor. Instead, the suspect was given seven days to pick it up on his own. He didn’t.

When 13 Investigates told Ali about the GPS violation, he was surprised Segura was even given the option to pick it up himself.

If an accused criminal is determined to be poor and a judge orders GPS monitoring, Harris County taxpayers pay for it. The device is almost always affixed to someone’s leg the day it is ordered. Supervision is handled by Harris County Pretrial Services.

If the defendant can afford a surety bond (usually through a bondsman), the courts expect you to pay for your own GPS monitoring.

“That’s definitely crazy,” Ali said. “Whenever they get out of jail, they should already have the GPS monitor on their ankle before they walk out.” 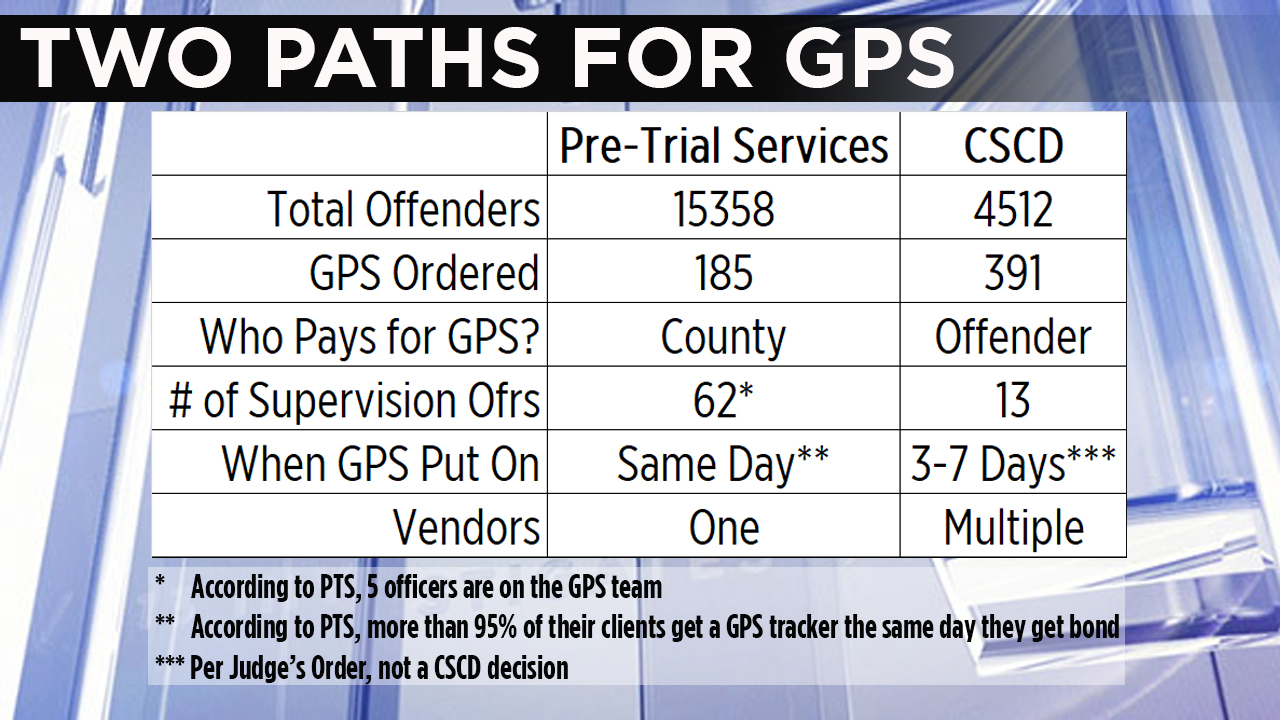 Segura’s situation isn’t just an isolated incident. 13 Investigates found case after case where accused violent criminals are told to get GPS monitors, but don’t comply. Other suspects pick up the battery-operated devices, but don’t charge them. Once the battery dies, the suspects go unmonitored, sometimes for weeks, before getting caught.

And, the problems don’t stop there. Not only did Segura not pick up his ankle monitor, but about a month after being released on bond he allegedly committed another aggravated robbery.

He’s one of several defendants 13 Investigates found who went on to commit other crimes while they skirted the GPS ankle monitor system.

Today, as bail reform has become more popular, the agency is overseeing 391 GPS cases. That’s 10 times the cases, and yet only two additional officers were added to the Harris County Community Services & Corrections Department, the county arm that supervises defendants on surety bonds.

On a mobile device? Click here to view the chart.

The system relies on accused violent criminals facing long prison sentences not only to pick up their devices, but pay for it, too. CSCD’s Bond Supervision unit is entirely funded by the fees accused criminals pay.

“It’s impossible for the staff to keep pace,” said Dr. Teresa May, director of Harris County Community Supervision. “The amount of money we’re able to collect through supervision fees, that’s the only resource we have, dictates how many officers are available to supervise the cases.”

According to an analysis of nearly 300 Harris County GPS cases obtained by 13 Investigates, judges allow accused criminals who break ankle monitor rules to stay on the streets 42 percent of the time.

If an officer verifies the defendant violated conditions of their bond by either not picking up, wearing or charging an ankle monitor, the officer will report that violation quickly. But it does take time to investigate each one, and with the number of GPS usage alerts they receive daily, staff can’t always keep up.

“The courts aren’t open 24 hours a day, seven days a week, so those are barriers,” May said. “The other issue is we have to make sure that it is actually a violation and if you look at it … if I send in immediately a ton of false alerts to the courts, it’s really going to become like the boy who cried wolf. The courts are going to become very frustrated. They’re not going to trust the violations. I have an obligation to confirm that it’s an actual violation and not a faulty device.”

Houston Police Officers’ Union President Joe Gamaldi said GPS trackers, when used properly, could help police put a repeat offender at the scene of a crime, but the monitors themselves aren’t going to keep anyone safe. And, more often than not, they aren’t being used as intended.

Another flaw is that the suspects on bond are responsible for paying the bill for the monitor and if they don’t, the monitors are turned off, Gamaldi said.

“You have somebody who’s on bond for murder, makes a plea to the judge that ‘I can’t possibly pay this bond amount, please lower it,’ but oh by the way, you have to pay the bill for the ankle monitor that we’re going to put on,” Gamaldi said. “Does anybody think this makes any sense?” 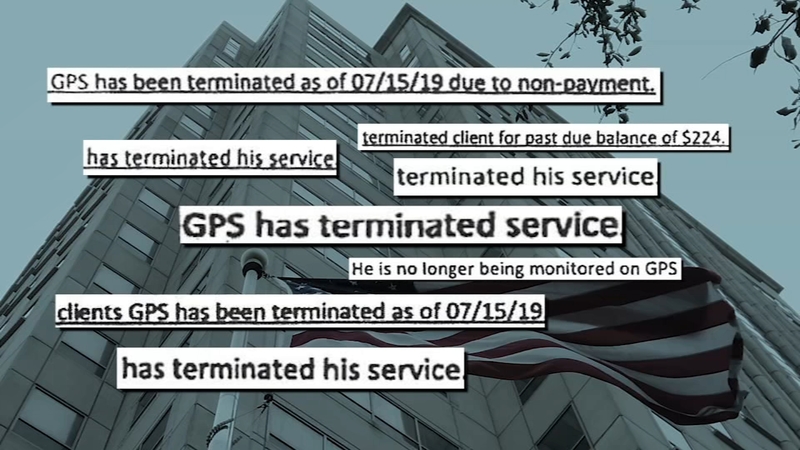 13 Investigates found case after case where accused violent criminals are told to get GPS monitors, but don’t comply.

As she unloaded bags from her car on July 3, 2019, Maria Ortiz didn’t think twice about two guys that were walking along the street near her apartment complex. Then, they started running towards her.

One of suspects grabbed her truck’s keys from her hands while another suspect pointed a gun at her and told her to start walking, and not turn around.

“I was scared, like I don’t know what’s going to happen,” Ortiz said through tears. “… As soon as I started walking, he screamed and told me to walk faster. If not, he was gonna shoot me.”

One of the suspects in that case was Segura – the same guy who was supposed to be wearing a GPS monitor while out on bond for allegedly robbing Ali.

“I don’t think he should be out on the streets,” Ortiz said. “If he has done a crime and then he does one recently, I don’t think it’s safe for him to be around the community.”

Still, even when a suspect picks up and pays for their ankle monitor, Gamaldi said the devices can be easily tampered with and aren’t reliable.

“Essentially what they’re doing is, while the house is burning down around them, they’re fixing the drapes and the people who lose are crime victims,” Gamaldi said. “…What lesson have you taught this career criminal? What you’ve taught them is there are no consequences for your actions. Go back out and do exactly what you were doing.”

Charges for offenders cited with ankle monitor violations are accused of everything from continued sexual abuse of a child to aggravated robbery and retaliation.

But, perhaps the most alarming case is Kenia Wilkins, a 24-year old who was sentenced last month to 50 years in prison for capital murder. 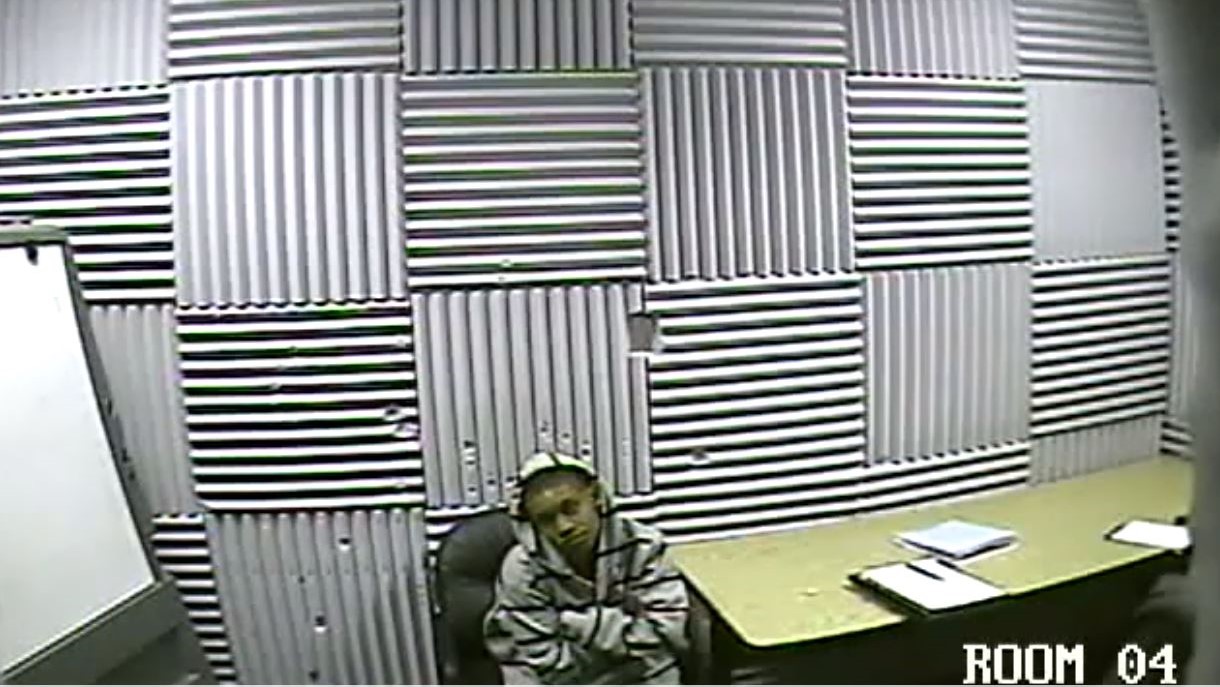 On Jan. 22, 2020, Kenia Wilkins, 24, was sentenced to 50 years in prison after killing Meng Bo in 2016 during a purse snatching. (Screenshot of interrogation video)

Wilkins balled up her grey and black-striped sweatshirt, placed it on the table and rested her head on it as she stared at the wall of an interrogation room on July 11, 2017.

When two detectives came in, she sat up and they started asking her about what happened on Dec. 26, 2016.

For roughly two hours, the detectives questioned her about where she was that day and what she knows about Meng Bo, a 30-year-old woman who was killed that day during a purse snatching.

Wilkins was charged with capital murder, but despite that confession, she too was let out of jail on bond and told to comply with GPS monitoring. Court records show she stopped charging the battery-powered ankle monitor, but it took seven days to report her violation. It took even longer for the judge to sign the violation and get her re-arrested.

“What good is an ankle monitor if we already know it’s not on them and it doesn’t get reported to us for weeks,” Gamaldi said. “We’ve seen where people who’ve had these ankle monitors have since committed more crimes while that ankle monitor was down and while nobody had been notified. It’s a false sense of security.”

May, who not only supervises some of the most violent offenders but is a psychologist herself, said it is important for crime victims to know that just because a defendant is wearing an ankle monitor while on supervision, it doesn’t necessarily guarantee safety.

She pointed out a case where a capital murder suspect went on to commit another crime, despite properly wearing a GPS ankle monitor.

“There is absolutely no evidence in the research that these devices prevent an individual from committing a crime and there’s no evidence it enhances public safety,” May said.

After 13 Investigates started asking questions about GPS ankle monitoring, we learned there are some solutions that can be implemented to make it better, starting with strapping ankle monitors on in jail and most prominently ending the offender pay system.

The county has already started the planning for that.

“I’m very grateful for that because that’s something we’ve been asking for since I’ve been in the door here,” May said. “I hope it puts me out of the bond supervision business completely. And that’s what should happen.”

The victims 13 Investigates spoke with both said they were on edge for months, traumatized by being held at gunpoint.

Segura is currently in custody, but knowing now that he was out on bond and not monitored like he was supposed to be doesn’t provide the victims any relief.

Astros vs. Red Sox: Can Luis Garcia leave ugly Game 2 behind to lead Houston to an AL pennant?

HOUSTON, Texas (KTRK) — Luis Garcia, whose early exit from his Game 2 start was …