Gun control is among the most important issues to Democratic voters and in the waning days of the primary election, one candidate for Texas’ 24th Congressional District is accusing a top contender of telegraphing a mixed message.

Data scientist John Biggan this week accused rival Kim Olson, a retired Air Force colonel, of “saying one thing to one group and another to a different group for political gain.”

Olson is a leading contender in the high-profile primary race to represent suburban Dallas. The seat is open after eight-term Republican Rep. Kenny Marchant announced his retirement last year. Local and national Democrats alike see the seat as a key pickup to expand their majority in the U.S. House of Representatives and further cement support in suburban America.

Striking the right balance on gun control in Texas, a state long defined by its gun-toting culture, is crucial if Democrats hope to succeed — especially after former Democratic U.S. Rep. Beto O’Rourke was lambasted for backing a mandatory buy-back program for semi-automatic weapons as part of his presidential bid. 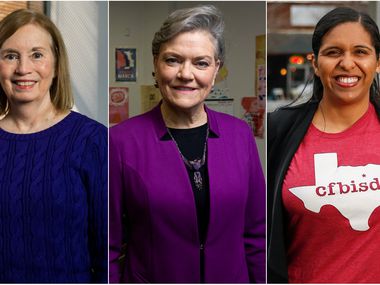 Similar to how Democrats nationally are looking for the candidate who has the best chance to beat President Donald Trump, voters in this Dallas suburb are wrestling with which aspirant is most likely to build the largest coalition to tip the district in their favor.

Curbing gun violence is one of several issues Olson named as the reason she is running for Congress in an interview with The Dallas Morning News earlier this year.

She added: “No, I’m not going to come knocking on your door and take your damn guns away.”

But Biggan highlighted a video clip Olson posted to her own Twitter account from October in which she forcefully spells out her policy prescriptions to curb gun violence that include universal background and closing gun sale loopholes.

“Weapons of war do not belong on the streets of America. Full stop,” Olson said. She added: “We need to get these weapons that have high capacity magazines off our streets.”

Biggan said he’s spent much of the campaign trying to figure out Olson’s position on gun control.

“If this is how her public statements change, I can only imagine what she says behind closed doors to her high-dollar donors,” Biggan said in a statement. “Ms. Olson has repeatedly said that she is able to speak truth to power. It is time that she start doing that.” 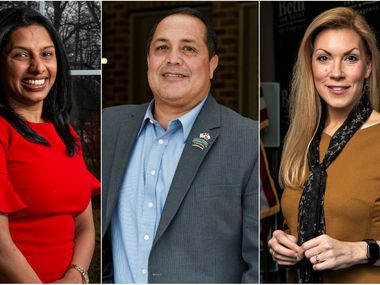 As in so many other Republican primaries, one of the central issues for Texas’ 24th Congressional District is who is the most Trumpian. The forum, held in early February on the third floor of a furniture store in this Dallas suburb, was only one of the venues where the candidates touted their Trump credentials.

Olson’s campaign pushed back, saying her views have been consistent and that she is highlighting ways to reduce the number of semi-automatic weapons on the street without a mandatory program.

“As a combat veteran, a gun owner, and someone who has expert marksman training, I support the 2nd Amendment, and simultaneously, as a mother and grandmother, I find it unacceptable that weapons that could be used in a combat zone are being sold to civilians and used to kill Americans,” Olson said in a statement, echoing her response in The News’ Voter Guide questionnaire.

In her statement Tuesday, Olson said she would support a voluntary buyback program.

However, they were less likely to support a ban on assault weapons or a gun buyback program.

Previous Dallas County picking up the bill for primary election after Dems, GOP fall short on poll workers
Next Teens in stolen van lead police on chase and crash in north Houston