This teen celebrated her graduation in the most H-town way

Reddick, Springer heat up Memorial weekend with some of the best crawfish in town

HOUSTON, Texas (KTRK) — The Houston Astros have learned their punishment after Major League Baseball’s investigation into the organization’s illegal use of technology to steal signs in 2017.

“I have higher standards for the city and the franchise and I’m going above and beyond MLB’s penalty,” Crane said during a press conference on Monday. “We worked very hard to build this organization for our employees, fans, sponsors, community and the city to all be proud.” 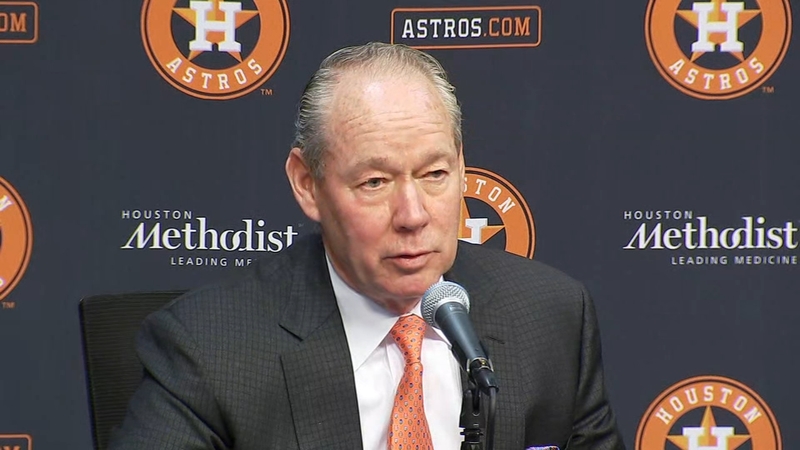 “I have higher standards for the city and the franchise and I’m going above and beyond MLB’s penalty,” Jim Crane said during a press conference on Monday.

The team will also be forced to forfeit its first and second round picks in the 2020 and 2021 MLB draft.

In addition, the Astros were fined $5 million, which is the highest allowable fine under the Major League Constitution.

“While the evidence consistently showed I didn’t endorse or participate in the sign stealing practices, I failed to stop them and I am deeply sorry,” said Hinch in a statement.

In addition, former Astros assistant GM Brandon Taubman, who was fired by the Astros in October after he made offensive comments directed at a group of female reporters at the end of the American League Championship Series, has been suspended for one year.

“We need to move forward with a clean slate and the Astros will become a stronger organization because of this today,” Crane said. “You can be confident that we will always do the right thing and we will not have this happen again on my watch.”

READ: Full MLB Commissioner’s Report
According to ESPN, witnesses admitted the Astros used a system to relay pitch types to batters before they were thrown.

Taubman, who is currently not employed by an MLB club, will not be able to work in baseball during that time.

The suspensions of Luhnow, Hinch and Taubman are to begin immediately, ending on the day following the completion of the 2020 World Series.

“I find that the conduct of the Astros, and its senior baseball operations executives, merits significant discipline,” Commissioner Rob Manfred said as part of the nine-page ruling. “I base this finding on the fact that the club’s senior baseball operations executives were given express notice in September 2017 that I would hold them accountable for violations of our policies covering sign stealing, and those individuals took no action to ensure that the club’s players and staff complied with those policies during the 2017 postseason and the 2018 regular season.

“The conduct described herein has caused fans, players, executives at other MLB clubs, and members of the media to raise questions about the integrity of games in which the Astros participated. And while it is impossible to determine whether the conduct actually impacted the results on the field, the perception of some that it did causes significant harm to the game.”

Back in November, former Astros pitcher Mike Fiers told The Athletic the team used a center-field camera to help steal the signs.

RELATED: What to know about Astros general manager Jeff Luhnow

Fiers now pitches for the Oakland Athletics and told the website that he warned teammates with the Detroit Tigers and A’s that Astros hitters had used a video feed piped into a monitor near the dugout to decode signs and relay them to hitters during games.

Before the league’s decision was announced, it was expected that the targets for discipline would be employees of the team, including front office and on-field coaching personnel, but not players.

Houston Mayor Sylvester Turner stood by the Astros, “Now, it is our turn to carry the Astros on our shoulders and lift the owner, coaches, and players as they focus on moving the organization beyond this challenge,” said Turner.

Jeff Luhnow released the following statement regarding the incident:

I accept responsibility for rules violations that occurred on my watch as President of Baseball Operations and General Manager of the Astros. I apologize to the Astros organization, Astros fans and the Houston community for the shame and embarrassment this has caused. I am deeply grateful to Jim Crane for the opportunity to lead baseball operations. I am not a cheater. Anybody who has worked closely with me during my 32-year career inside and outside baseball can attest to my integrity. I did not know rules were being broken.

As the Commissioner set out in his statement, I did not personally direct, oversee or engage in any misconduct. The sign-stealing initiative was not planned or directed by baseball management; the trash-can banging was driven and executed by lower-level employees working with the bench coach. I am deeply upset that I wasn’t informed of any misconduct because I would have stopped it.I agree with Mr. Crane that our baseball operations team has achieved far more positives beyond this significant negative. Many very good people have worked, and continue to work, for the Astros organization. I am extremely proud of the many executives throughout the industry who were trained and promoted in our department.

AJ Hinch released the following statement regarding the incident:

“I appreciate Commissioner Manfred’s unwavering commitment to upholding the best interests of baseball. I regret being connected to these events, am disappointed in our club’s actions within this timeline, and I accept the Commissioner’s decision.

As a leader and Major League Manager, it is my responsibility to lead players and staff with integrity that represents the game in the best possible way. While the evidence consistently showed I didn’t endorse or participate in the sign stealing practices, I failed to stop them and I am deeply sorry.

I apologize to Mr. Crane for all negative reflections this may have had on him and the Astros organization. To the fans, thank you for your continued support through this challenging time – and for this team. I apologize to all of you for our mistakes but I’m confident we will learn from it – and I personally commit to work tirelessly to ensure I do.

My time in Houston has provided some of the greatest moments in my career and those memories will always be near and dear to me and my family. I regret that my time with the Astros has ended, but will always be a supporter of the club, players, and staff I’ve had the privilege of working alongside. I wish them the best in the future of the game I love.”

Woman questioned after shooting husband to death in Houston apartment

HOUSTON, Texas (KTRK) — The wife of a man who died from a gunshot wound …