A year ago, Dallas police officials were seeing a clear gang and drug nexus with the uptick in violent crime.

But this year, the increase in shootings and homicides have them puzzled. A majority of the gun violence is among people who know each other well.

“It’s sporadic,” said Deputy Chief Reuben Ramirez. “It’s two people who are involved in an argument that otherwise might have been mitigated through some sort of resolution or some sort of discussion. But in these cases, we’re seeing people with weapons that are pulling those weapons abruptly and using them.”

At the city’s Public Safety Committee meeting Monday, officials speculated whether the uptick is related to the economic crisis and stress from the coronavirus pandemic.

Some council members said underlying issues with the violent crime problem are going to require additional solutions outside of law enforcement. A majority of the council has voted in favor of an amendment to cut $7 million in police overtime to fund a variety of programs in the proposed 2020-21 budget.

An analysis by the Wall Street Journal found that homicides were up 24% so far this year in the nation’s 50 largest cities. Dallas police have reported 162 homicides according to a tally by The Dallas Morning News. A year ago, police reported 150 homicides at this time a year ago.

Police also said that so far this year, there’s more victims associated with reported violent crime incidents compared with a year ago. Police have reported 2,640 aggravated assaults that involved 3,876 victims, a 28% increase in the number of those affected so far this year.

Council member Casey Thomas said it’s challenging for police to prevent these escalating disturbances, some of which have had a domestic violence connection. Thomas said the COVID-19 pandemic has affected people through job losses and housing security.

“How do you prevent an individual who may have just lost a job and don’t know how to process, and then they take it out on their family,” he said. “We need to take a look at some of these factors.”

Domestic violence cases this year have been violent. In May, a 34-year-old woman in a domestic violence dispute began shooting her husband, which led to a SWAT standoff in which she killed her 9-year-old daughter before turning the gun on herself. In July, a 32-year-old man was charged after he admitting to sexually assaulting and killing his 71-year-old grandmother in her Old East Dallas home, according to court documents. Weeks ago, a man told police he had shot his wife and two teenage children because he had a headache and they were being loud, court documents said.

Councilwoman Cara Mendelsohn raised concerns about how cuts to overtime could affect the department’s police response.

“Safety is the number one responsibility of the city,” Mendelsohn said. “But what’s also the responsibility for City Council members is to adequately budget so that we’re not using emergency reserves for operational expenses.” 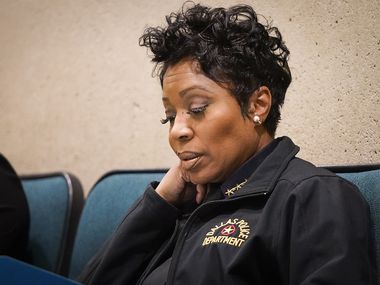 Chief U. Renee Hall is one of several police chiefs across the country who have stepped down after nationwide unrest over the May 25 death of George Floyd in Minneapolis and calls to defund or rethink policing.

Dallas Police Chief U. Reneé Hall, who is resigning at the end of the year, said she has regularly met the budget for overtime but that this year’s costs were “unprecedented.” Officers needed to use additional overtime because of the Dallas tornado, pandemic and massive protests.

“There is some concern, but it will not hamper what we are going to do in this city,” Hall said of the proposed cut.

Hall said she would like to see funding for violence interrupters, who would work in a crime deterrence program known as Operation Ceasefire. The program originated in Boston in the 1990s and focuses on shootings.

As part of its focus to increase technology, DPD will expand a camera surveillance program called “Starlight.”

The Starlight system works by feeding into the department’s Fusion Center, an intelligence-gathering unit. If there’s abrupt movement, such as people running or cars speeding off, the system sets off an alert to the center so someone can monitor the video.

The department plans to expand the program to 20 locations but that will unfold in increments. Police will hold a news conference on Sept. 22 to discuss the latest locations.

A warm weekend before the next cold front arrives