HOUSTON, Texas (KTRK) — In her Tuesday morning announcement of a Stay Home order, Harris County Judge Lina Hidaldo suggested she was nervous about public health predictions that the region’s supply of hospital beds wouldn’t be enough.

In neighborhoods where public health experts suggest coronavirus could be especially hard-hitting, the fear is real.

“Very, very nervous. We take it very seriously,” Reda Mitchell told ABC13 from her Settegast neighborhood as her grandchildren played around her.

A study released on Monday from the UT Health School of Public Health identified Settegast, with a high concentration of elderly and chronically ill residents, could be one of the hardest hit in the Houston area.

UT Health authors suggested the region should even consider adding surge hospital capacity in neighborhoods like hers. Those decisions haven’t yet been made.

Mitchell had seen the news, “I just went crazy. I was like, ‘Oh my God. Are you serious?’ I started doing a little bit more cleaning up.”

Government and health care leaders preparing for an influx of patients may be more than hospital beds we have. It’s one of the reasons behind the stay-home work-safe order.

Hospital CEOs have told the judge a surge in patients may be coming.

“We have currently a capacity to accept more patients. However, that capacity is slim and that changes from day to day,” said Dr. Esmaeil Porsa, the CEO of Harris Health, which runs Ben Taub & LBJ hospitals. “[Our occupancy is] always above 90 percent.”

Porsa said their ICU beds are even more used than that. Methodist Hospital is 68% system-wide and 75% of ICU beds are full. ABC13 asked Memorial Hermann for occupancy data. A spokesperson said it couldn’t be shared.

The fear is clear for Houston hospitals, like Ben Taub, that Houston would see what New York is already seeing. 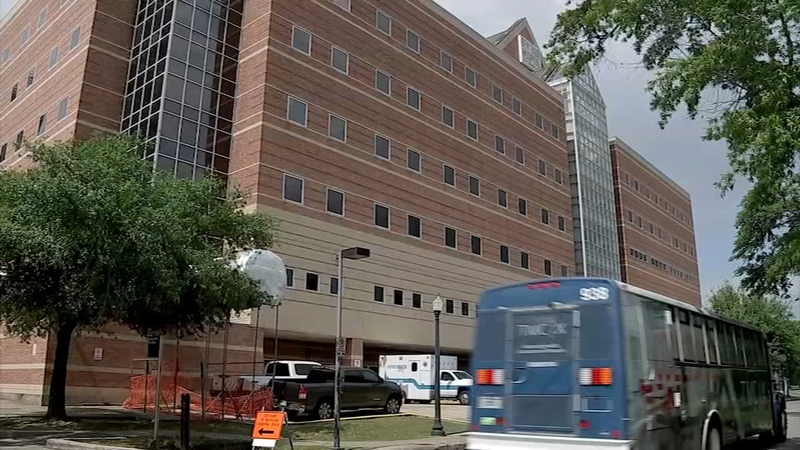 Government and health care leaders preparing for an influx of patients maybe more than hospital beds we have.

“We are watching unfold in New York getting completely overwhelmed and overrun,” Porsa told ABC13. “The amount of community transmission that is happening today, we really are not going to be aware of it until two weeks from now when those cases become symptomatic. So, and that’s the scary part, because nobody really knows what the true penetration of the disease is in our community right now.”

But the predictions prove hard to nail down. When Judge Hildalgo announced her order Tuesday morning, she said consulted an expert at UT Health whose research has not been published. The judge’s office sent ABC13 two studies: one from a consortium of volunteer scientists and another from a university in England. Neither looks at the Houston area specifically.

The Covid Act Now consortium suggests three months of sheltering in place is the only option that could keep hospitals from being over-run. The London study doesn’t even consider that option, proving there’s no sure way to know what is coming here and when.

In the end, it may have been the fear of not acting to prepare hospital beds that forced leaders’ decision. Towards the end of Tuesday’s lengthy news conference, Houston Mayor Sylvester Turner told reporters, “What we cannot accept is not doing enough as numbers rise.”

HOUSTON, Texas (KTRK) — Another person has died from the novel coronavirus in Houston, Mayor …