Dallas County commissioners approved an emergency $359,000 on Tuesday to cover the cost of poll workers for the March 3 primary election after both political parties fell short on staffing.

In Texas, the two major political parties are responsible for running their primaries. They typically contract with local election departments for voting equipment and other logistics. However, the parties historically bear the brunt of recruiting and placing election judges.

In previous years, the parties would consolidate election locations if they fell short on workers. However, that option gained little traction this year after Dallas County commissioners promised voters they’d keep every precinct after shifting to countywide voting last year. 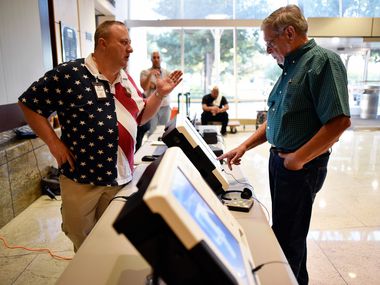 According to elections chief Toni Pippins-Poole, Democrats have a commitment from 352 judges while the Republicans have only confirmed 67. Each party was supposed to recruit 465.

“By the time it is all said and done, we’ll have between 250 and 275 judges, which is right where we told them we’d be,” Anderson said.

Anderson acknowledged the GOP has had a more difficult task recruiting election workers in part because the top of the ticket is undisputed with President Donald Trump and U.S. Sen. John Cornyn.

Even with a better showing by Republicans, the county is far short of the 930 judges the parties are supposed to recruit to be at 100%. The elections department hopes to coax county employees to take a day off to work at a polling location. Election officials will then turn to staffing services to backfill the rest.

Pippins-Poole suggested she won’t need the full amount, especially if the Republicans find more workers. Each temporary worker the county hires will cost up to $19.95 per hour, which includes the staffing service fee. The state will reimburse the county just $12 per hour.

The decision to bankroll the primary sparked intense debate among the commissioners.

John Wiley Price, a Democrat who represents most of southern Dallas County, suggested Republicans were trying to sabotage the election.

“They jacked this up,” he said.

J.J. Koch, the commissioner court’s lone Republican who voted against the spending, countered, saying the GOP had long warned that a shift to voting centers would cause logistical problems for primary elections and that the election department does not have a handle on its new system.

“They’re not working with us,” Koch said after the vote. “We keep getting thrown under the bus when it’s not our fault.”

Koch previously raised concerns that the elections department has mismanaged the transition to new voting software and countywide polling.