Coronavirus case update, what’s open and where to get tested in Grapevine

Coronavirus cases increase in Colleyville, masks will now be enforced, what’s open and where to get tested

WASHINGTON — President Donald Trump will fly to Austin on Sunday to keynote the American Farm Bureau Federation’s annual convention — an election year opportunity to tout progress on trade deals with China, Mexico and Canada, and perhaps to shore up support in a state that has slowly slipped from the GOP’s iron grip.

It’s his third straight year appearing before the nation’s largest farm group and his 14th visit to Texas since becoming president three years ago next Monday. That’s triple the number of Texas visits by President Barack Obama during his first term, and Democrats call the attention Trump has lavished on the state a sign of a major political shift underway.

The farm group announced the speech on Monday.

Trump will spend the weekend at his Mar-a-Lago resort in Palm Beach, Fla., with a campaign fund-raising event scheduled for Friday night.

On Wednesday, he is hosting China’s vice premier, Liu He, at the White House for the signing of a “phase one” trade agreement that will have China buying at least $40 billion in U.S. farm commodities this year and in 2021. That’s twice as much as before the trade war that has simmered for nearly two years. But major tariffs remain in place subject to further talks, leaving farmers wary.

Through last week, the Trump administration provided $19 billion in taxpayer-funded subsidies for farmers and ranchers who have lost revenue due to retaliatory tariffs in the last two years. 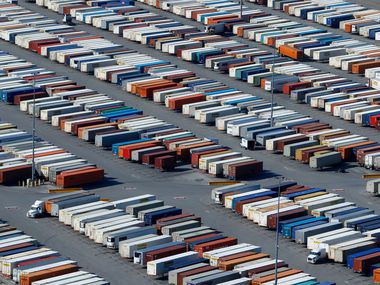 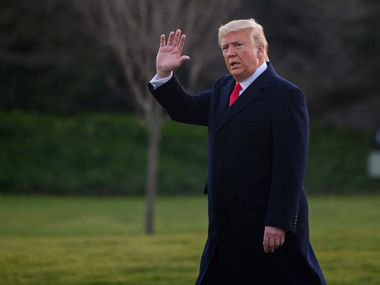 Last month, the House approved a major North American trade deal known as the U.S.-Mexico-Canada Agreement, one day after approving two articles of impeachment against Trump. The USMCA, an update of the 25-year-old North American Free Trade Agreement, is unlikely to receive a Senate vote before the impeachment trial, which has yet to be scheduled.

A lengthy trade war with China had imposed pain on Texas agriculture and other sectors. More than 3 million jobs in Texas rely on international trade, and at one point China had targeted $10 billion in state exports for retaliatory tariffs, including liquefied propane, grain sorghum and cotton.

Farmers and ranchers around the country have been impacted.

As tensions flared last summer, China announced that its state-owned enterprises would halt purchases of any U.S. agricultural products. Farm Bureau president Zippy Duvall called it a “body blow to thousands of farmers and ranchers who are already struggling to get by,” warning that with exports to China cut by $1.3 billion in the first half of 2019, American farmers faced the loss of a market that had already plunged from $19.5 billion in 2017 and $9.1 billion in 2018.

For the Farm Bureau’s 101st annual convention, at the Austin Convention Center, all that is in the past.

“The American Farm Bureau is honored President Trump will return for a third consecutive year to speak with farmers and ranchers who work tirelessly to produce the quality food and fiber our country needs,” Duvall said in announcing the president’s Sunday appearance. “We are grateful that he has made agricultural issues a priority and look forward to welcoming him to Austin at a time when there is much to talk about, from trade progress to important regulatory reforms.”

Trump beat Democrat Hillary Clinton in 2016 by 9 percentage points in Texas — a comfortable margin, but the smallest for a GOP nominee in a generation. Sen. Ted Cruz narrowly won reelection in 2018 with less than 51% against El Paso Democrat Beto O’Rourke, in a state where Democrats haven’t won a statewide contest since 1994.

The president’s Austin visit is billed as official business, rather than a campaign rally. Farm Bureau members come from around the country for this convention. And Travis County is hardly the epicenter of Texas Republican activism. Still, Democrats cast the visit as the latest entry on a remarkable and growing list of defensive forays for Trump.

“After making seven visits to Texas in 2019 and making another early in 2020, team Trump is clearly terrified of losing Texas. Without Texas, Donald Trump cannot win this election. Trump’s failed policies, trade wars, and broken promises to Texas workers, farmers, and families are why he will lose,” said Texas Democratic Party spokesman Abhi Rahman after the Austin visit was announced.